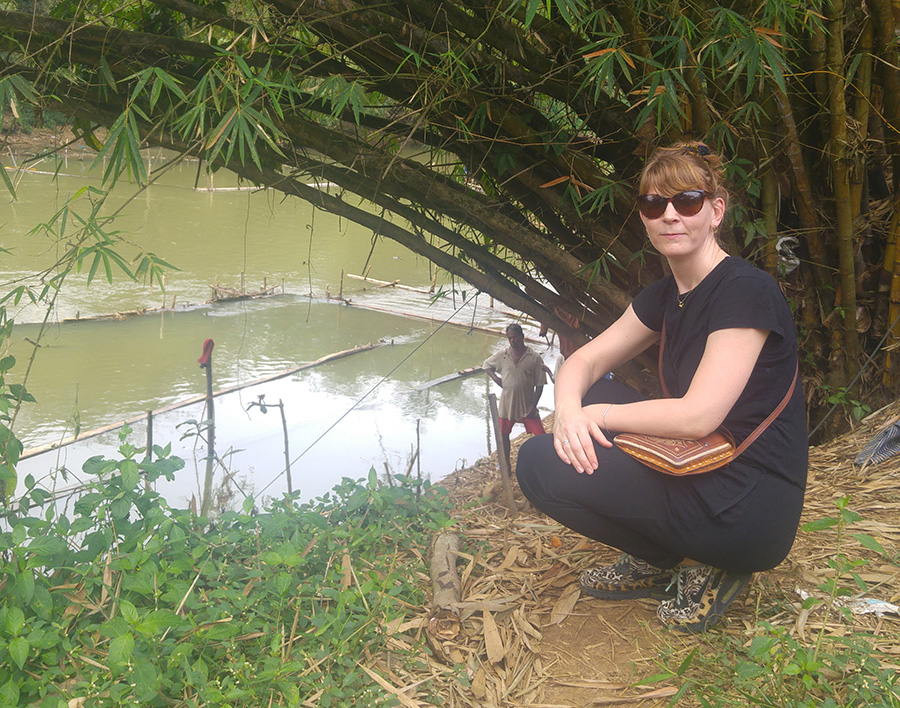 Over the past couple of years I have developed an interest in gemstone mining and artisanal (hand) mining in particular.
I’m interested in whether…

For years I avoided using gemstones in my work because I have been suspicious of the exploitative nature of the industry, but recently I have discovered companies such as RubyFair, Fairtrade Gemstones and Nineteen48 and I am keen to learn more.

I met with Stuart to talk more about his work and his mines. The first thing that sets Nineteen48 apart is that they pay their workers the living wage plus commission, unlike mines across the world that solely pay commission.

They also contribute a percentage of their profits to community projects surrounding the mine.

After chatting for a while Stuart invited me to visit the mine in Sri Lanka. Unfortunately, the dates that I could travel didn’t match with Stuarts, so I liaised with his Sri Lankan business partner Janaka and arranged a time.
I set out to visit the Nineteen48 mine with my tour guide Amara. I had gotten to know Amara over the course of a 10 day tour with Toucan Travel prior to the mine visit. Amara was coincidentally from Rapnapura, the same mining town.

Amara offered to accompany me, which was ideal, as I could ask him lots of questions and I felt extra safe.

It is important to mention that mines can be very dangerous places and nobody should ever visit a mine on their own unless they are an expert.

Unfortunately due to a completely understandable miscommunication with Janaka, he thought I wanted to visit the HQ in the capital city rather than the mine site.

All was not lost, and in actual fact what happened instead was equally valuable…

Amara called a family friend who also owned a mine in Rapnapura. Within five minutes, the mine owner appeared on his motorbike and we followed him to his mine.

As we were approaching the site, before the men were aware of our presence, there was something quite magical about the scene. It was a riverbed mine. The men were working peacefully at a distance and I could hear them laughing and chatting as they worked.

The riverbed mine – men using shovels on extra long sticks to find rough gemstones on from riverbed.

I was told that our timing could not have been better, as they were washing the gemstones they had found in the riverbed. I got to see them picking out rough gems fresh from amongst the riverbed pebbles. 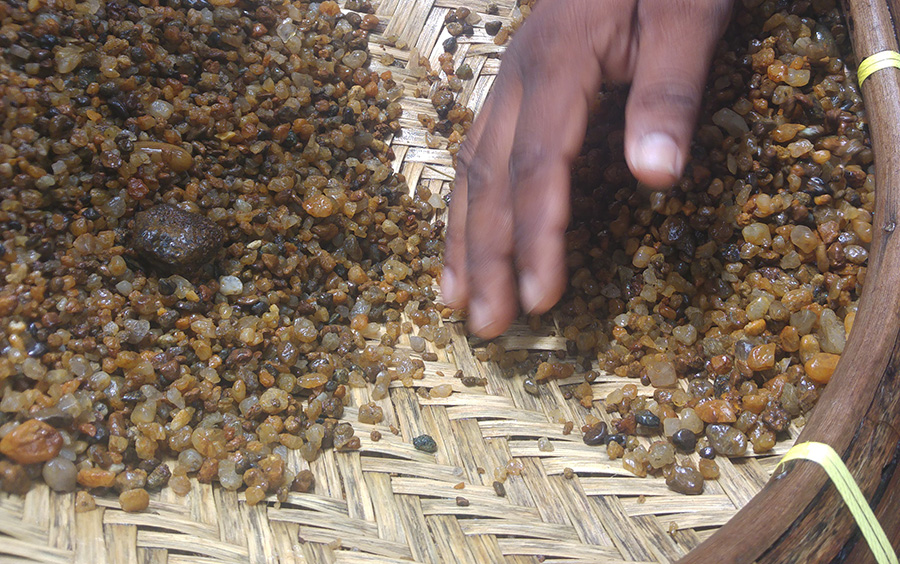 Right to left: A rough garnet, a rough yellow sapphire and a handful of rough sapphires

One thing that became apparent was that there was no use of chemicals in this mining process. I found this surprising, as in gold mining they use a lot of mercury and cyanide to extract the raw material and children are often the ones using these chemicals with their bare hands. 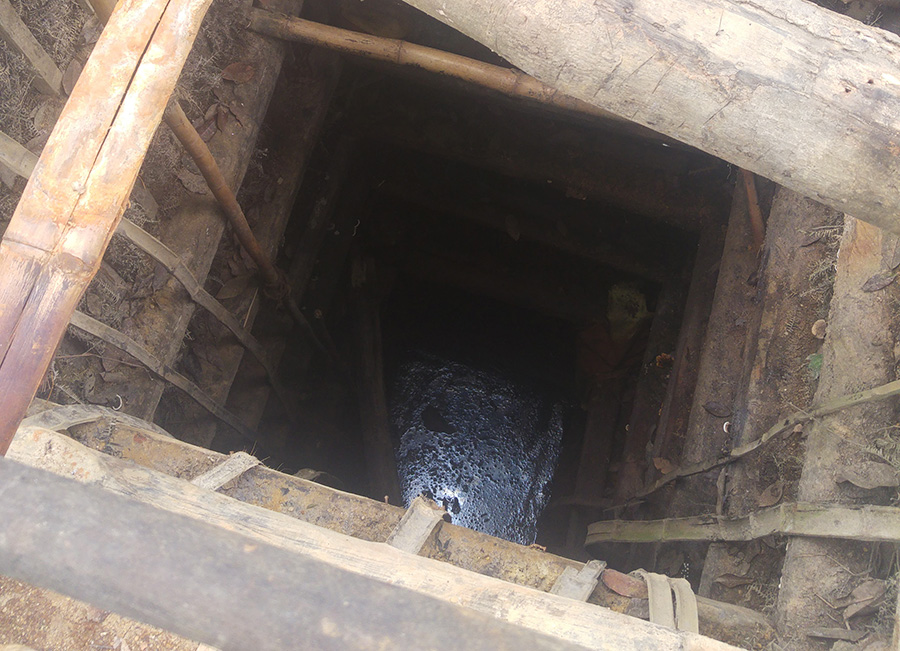 Next to the riverbed mine was an underground mine; this is a little bit like a water well.

As I peered into the pit I could see two men at the bottom completely covered in mud. They were collecting gemstones from the pit and sending them up in a basket on a pulley. 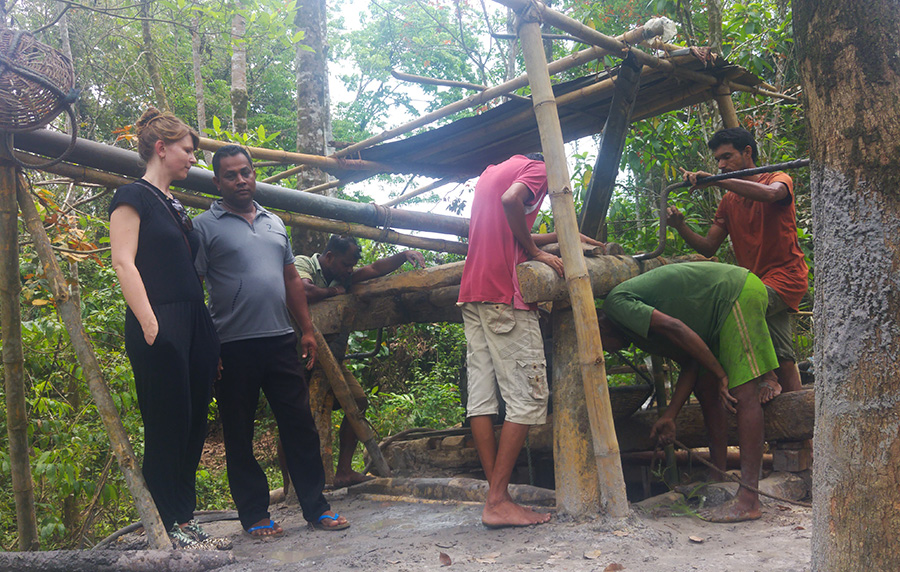 Unlike the Nineteen48 mine, these miners are not paid a living wage. My understanding is that they are not even paid a base wage, which is reflective of the wider mining industry. They are just paid commission, which can vary from the equivalent of as little as £2.50 a week for them and their family, up to thousands of pounds.

The justification for this is that if the miners were paid a base wage, there would be no incentive not to pocket and smuggle their findings and sell them on the black market.

After visiting the mine I was invited back to the mine owner’s house and offered tea with his wife. She didn’t speak a word of English, but I showed her photos of my day.

I enquired about buying gem or two as a thank you, but this mine owner sells his rough gems in job lots to Thai dealers for a minimum of £5000. The fact that they never had any intention of selling anything to me was testament to their unwavering hospitality and readiness to show me around. I will always remember that.

Visiting this mine was such an incredible experience. I got to see a world that tourists never see, completely off the cuff. 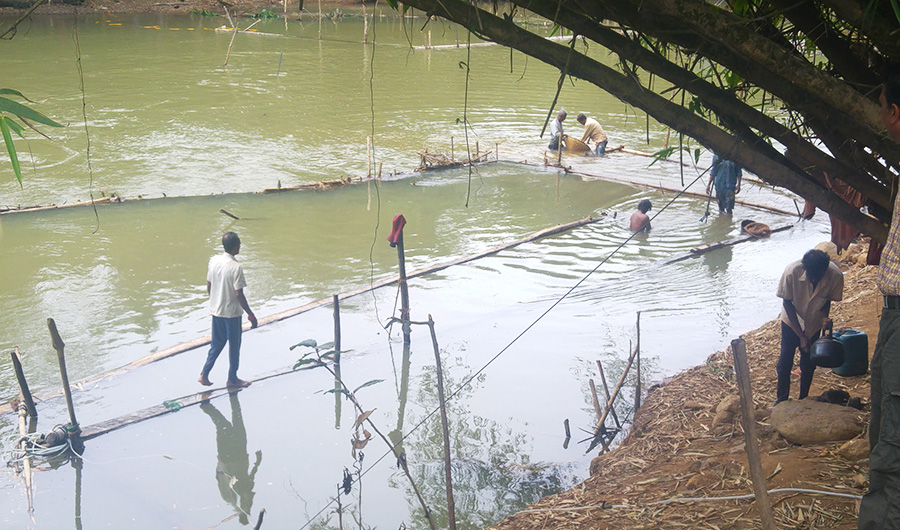 Since returning I have been speaking to Stuart and he revealed that riverbed mining is usually illegal in Sri Lanka because it destroys natural habitats on the surface of the riverbed that are essential for the food chain.

The Gem Authority does issue liscences for riverbed mining, so I assume that this one must be legal, otherwise I’m sure they would have discouraged me taking photos.

It has inspired me to organize more visits so that I can keep learning about the mining industry and report back to my customers. I would love to try again to visit the Nineteen48 mine. Next year maybe!

This site uses Akismet to reduce spam. Learn how your comment data is processed.

A Selection of Top Posts